Papi Rob Hanover has returned to his place of foaling. His trainer Brett Pelling, along with wife Joanne and daughters Grace and Lilly, today drove the World Champion son of Somebeachsomewhere from their farm in New Jersey to Hanover, Pennsylvania where he will embark on his second career as a stallion. Papi Rob Hanover is the first horse to occupy the stall of the late great Somebeachsomewhere since his passing. Papi Rob’s fertility exam is slated for September 16. Shares will start to be sold shortly thereafter. Please call Dr. Bridgette Jablonsky at (717) 578-7395 or email her at drjablonsky@hanoverpa.com for more information.

Papi Rob Hanover to stand at Hanover Shoe Farms
It is with great pride and excitement that Hanover Shoe Farms announces that superstar pacer Papi Rob Hanover will be returning to the farm he was foaled and raised at to begin stallion duties in 2021.
Papi Rob Hanover took a record of p,2,150.0f at two while earning $754,774. He won the Pennsylvania Sire Stakes Final, his Breeder’s Crown elimination, the Matron and Governor’s Cup. He crossed the wire first in the final of The Breeders Crown but was subsequently placed second. He was second in both his elimination and final of the Metro Pace (pacing both last quarters in less than 27 seconds) for a freshman slate of 12 starts with 6 wins, 4 seconds and 2 thirds.
In an abbreviated sophomore campaign, Papi Rob Hanover started 4 times. He was third in the Meadowlands Pace Elimination from post 10 with a 26.1 last quarter and second in the final, beaten a neck in 1:47.2 from post 9. Papi culminated his career with an electrifying World Record Performance in his Adios elimination, winning by 10 and a half lengths in 1:47.1 with a 26.3 last quarter over the 5/8 mile oval.
Papi Rob Hanover is from the second to last full crop of the legendary Somebeachsomewhere who has already displayed his ability to sire great stallions as evidenced by the dominance of his son Captaintreacherous . Papi Rob Hanover’s maternal pedigree is one of the best the business has. He is the second foal of the very fast Panera Hanover p,4,1:51.2f , she a sister to JK Panache P,1:47.3 ($662,789) and Philly Hanover P,3,1:49.2f ($334,241). Papi Rob Hanover’s grandam is the prolific Panned Out, she the dam of the winners of over two million dollars.
“Papi Rob was a great looking and extremely smart yearling. He reminded me most of his father of any Beach colt we have raised. He’s very correct and powerful and has a presence about him that signifies greatness. His win in the Adios Elimination was as scintillating a performance as I have ever seen. When he came flying around that last turn I had visions of Somebeachsomewhere. Combine all of that with his pedigree and I have little doubt that Papi Rob will be Beach’s next great siring son” says Dr. Bridgette Jablonsky.
Owner David McDuffee who purchased Papi Rob Hanover from the 2018 Standardbred Horse Sale for $130,000 says “I have been inundated with interest in Papi Rob from some of the largest breeding farms in the business. It’s very exciting to me that he is going back home and I am very confident that Hanover will give him every opportunity to become the great stallion that I know he is destined to become. I believe that the terms of syndication are very appealing, he is priced fairly with additional incentives ,so that we can put together a great syndicate to increase his level of success even more”.
Brett Pelling , trainer of such notables as Rocknroll Hanover and The Panderosa, developed and trained Papi Rob Hanover for the duration of his career. “Papi Rob is the most perfect horse I have been fortunate enough to train. He’s blessed with a flawless gait, strength and intelligence. He was fast and light on his feet. When you add in his looks, charisma, and wonderful temperament, I can’t fault him. He’s always left me in awe. He will be missed in the barn but I’m excited to see those traits in his offspring in the coming years”.
Papi Rob Hanover will stand the 2021 Breeding Season in Pennsylvania for an introductory fee of $10,000. A limited number of shares are available. Please contact Dr. Bridgette Jablonsky at (717) 578-7395 or drjablonsky@hanoverpa.com for further information and details of the syndication. 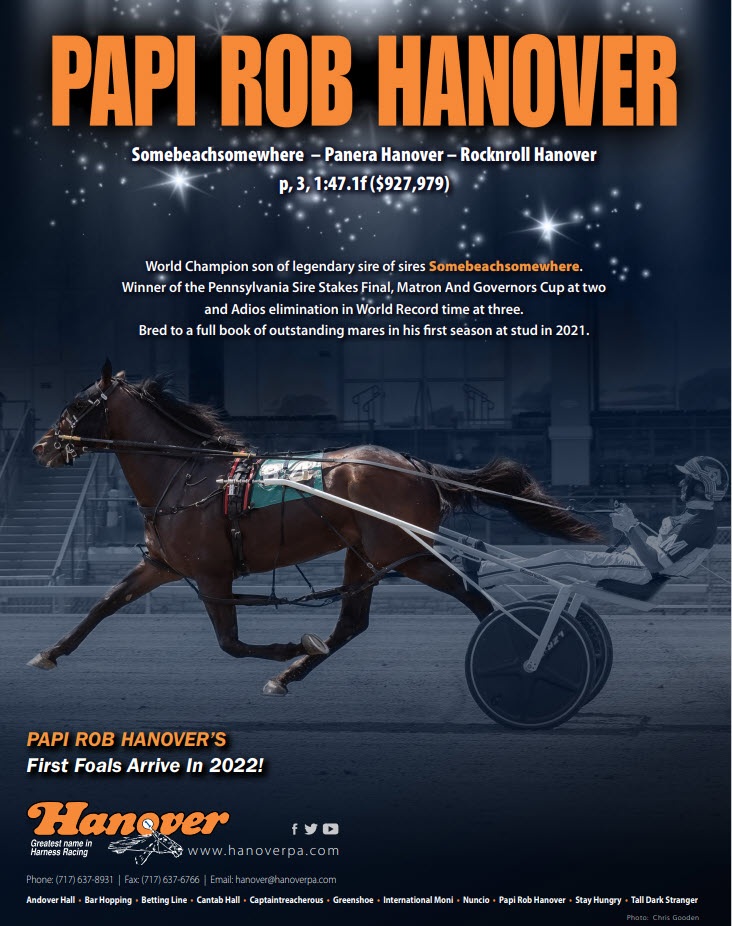